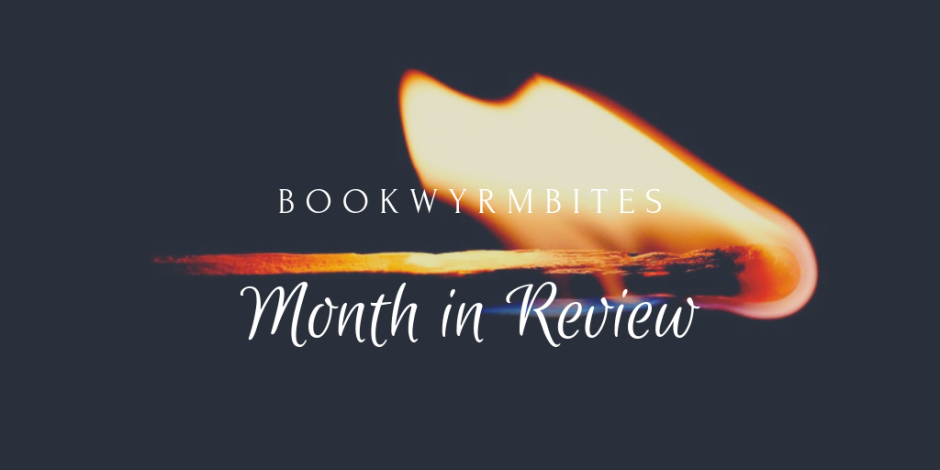 February has been simultaneously incredible and incredibly long , and it hasn’t been nearly as productive as I’d dared to hope. (That said, the quote above is a bit ironic because this semester, Tuesdays mean I only have one evening class, preceded by two hours of volunteering — which I love.) My exams weren’t great — shoutout to everyone who put up with me whining about studying and unfair grading policies, you know who you are and you’re awesome! — but they happened, and they’re over now.

February has been a particularly amazing time for me as a blogger! With every post I get a better sense of my blogging voice/brand, things I’d like to try out, et cetera; it’s also been great for keeping myself motivated to put words on the screen even if I don’t “feel like it” at the moment. Oh, and I recently hit 100 followers on this blog, and very soon afterward on Twitter! This newbie bookwyrm would like to thank you all so much for your love and support 💕

As I get more involved in the bookish community, I’d love to do more buddy reads and post exchanges, so please feel free to contact me if you’re interested in reading a book together (protip: you can use Goodreads’ “Compare Books” feature, which I explained in my Goodreads Tips & Tricks post, to find books in common between specific shelves; my read-next shelf has over 300 books that I have copies of but haven’t started yet 😉) or hosting / writing / collaborating on a post!

I’ve decided to try cutting this feature down to my favorite posts from this month, both on my own blog and some other awesome bookwyrms’ blogs!

Other Awesome February Posts (in no particular order)

I’m convinced it’s impossible for any single person to track or list all the amazing upcoming releases, so like last month I’ve only included the ones I know about and am personally most excited to read.

Also, I’m a little disappointed no one else seems to have noticed , but the wording of this section is very intentional: a nod to #20BIteen, AKA a year of amazing LGBTQIA+ representation! (Of course, it’s a great year for bookish diversity in general, but that would make for a very long title.)

As I announced in my latest State of the ARC, I’m officially banning myself from picking up more review copies next month. With so many left from #ReviewPit and 2018 in general, not to mention lots of backlist books that I want to get to soon(ish), I really can’t keep doing this to myself. (After all, I can always read these same books after they come out, with so much less time-based pressure.)

March will be another month of focusing on ARCs, and if I catch up I’ll switch to reading challenges to maintain my headstart. I’ve also been struck by the mood to finish off all the half-finished series (serieses? serii?) I have left, but a lot of those will involve rereading so I’m thinking it’s more of a summer break project. (Still, you may have picked up on the fact that I have very little impulse control, so…)

Classes are also starting to kick my butt, so I’m switching back to posting three times a week (tentatively Mon/Wed/Fri, but we’ll see how it goes) and hoping to get a lot of posts prewritten and scheduled for the subsequent months. It does help that I have a week of spring break plus no exams in March (but several in April, and finals in May), so again, we’ll have to wait and see how it all ends up going.

What’s the best book you read in February? Did you read any of this month’s releases, or ARCs of March/April releases? Have you set any goals for March?