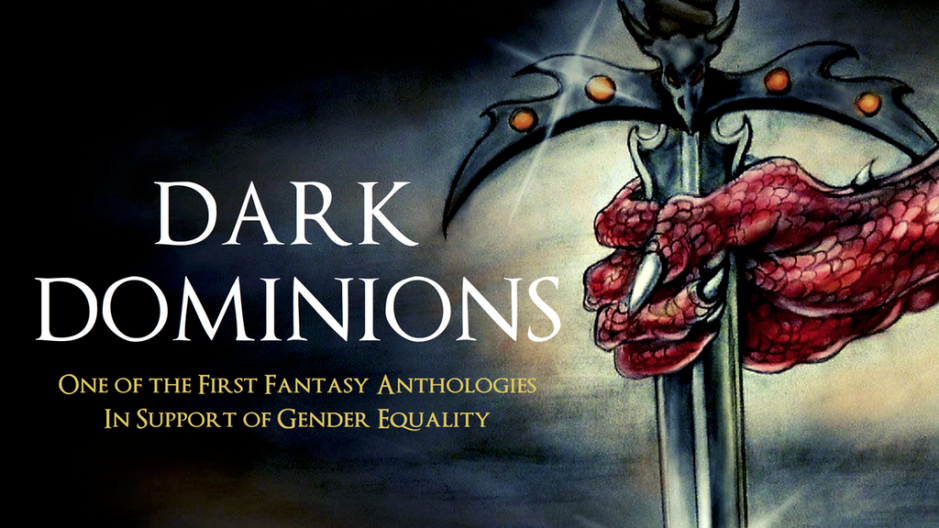 I have been informed that WriterWriter is unfortunately unable to proceed with Dark Dominions at this time, and the Kickstarter has been canceled.

Join us in worlds where a forest is marked by death, both for those who enter and those who survive it. Where a warrior as old as time is resurrected to not only fight the darkest of foes but also to come to terms with who she has now become. Where a prime assassin who has never missed a mark begins a dance with his most elusive target yet, a mysterious and alluring witch. Where an elf knight is able to influence real-life events through magical tapestries. And where a young princess encounters danger and deception amid a border war where defeat means the end of her freedom and the ruin of her kingdom.

When I heard about this project from Lauren @ Northern Plunder, I immediately knew this was something I wanted to support. Gender equality is an issue near and dear to my heart, one that needs addressing in general, but — more relevantly to today’s post — in fantasy and science fiction. (Maybe you’ve noticed/seen the callout regarding the tendency to classify female authors’ SFF books as YA even if they’re not? Just one example of how far we have left to go.) This anthology actively aims to level the playing field, and it looks amazing.

This post is not sponsored; the information that follows is taken directly from promotional materials sent to me by Morgan & David at WriterWriter.

In publishing, the idea remains that women can’t write as well as men, especially not male-dominated fields such as fantasy or science-fiction.

The Founders of WriterWriter want to prove them wrong.

How they’re going to do that:

What is Dark Dominions?

This anthology will be WriterWriter’s first official step into publishing with an epic collection of fantasy short stories from emerging and award winning writers alike.

Unfortunately, the Dark Dominions Kickstarter has been canceled.