As you may know, I dedicated last month to ARCs and managed to finish off the ones I received through #ReviewPit. Many of these were indie and self-published titles, so I’m bending my unofficial policy of only posting blog reviews for books I have very strong opinions on, in the hopes that more readers will get the chance to read and enjoy them.

Book links in this post include affiliate links, which means that if you click through and buy a book I will receive a small commission at no extra cost to you. [Full disclaimers here.]

With the exception of the first book, I received review copies from the authors through ReviewPit. This does not affect my ratings or opinions.

When Livia Stone suddenly loses her twin brother, Jasper, she must learn to navigate her new life alone.

As she faces tragedy and starts down a road toward self-destruction, Daniel enters Livia’s life — at a moment when she needs it most.

I received a review copy of this book through Xpresso Book Tours. This does not affect my rating or opinions.

There’s a lot of emphasis on Livia’s grief and coping mechanisms (more specific content warnings above), which is valid and important to see in books for young people — the fact that I had trouble relating or empathizing is mostly on me, though I do think the writing played a part too. The jokes didn’t quite work for me, and some of the dialogue/narration was pretty cheesy in parts and awkward at others.

Possibly this is resolved in the second half of the book, but I would love to see a character, any character but especially a YA/NA character, have a healthy relationship with therapy. It’s stigmatized enough, and although of course therapists are humanly flawed as anyone, the vast majority are not as oblivious and unhelpful as novels so often make them out to be.

Recently I’ve come across a lot of literary Chinese-American best friends, and I’m not sure if this has always been a “thing” or if it’s recent or just incidental to the books I’ve happened to pick up. But in this case, I did really appreciate the way Cao was written. Her complex relationship with her adoptive parents and a heritage she doesn’t identify with is a less commonly represented incarnation of the Asian-American experience and thus all the more important to see.

Once, there was a truce. Desperaux controlled the west with magic, and Desire claimed the east with steel and science. But now magic has disappeared, and the world has changed.

The kingdom of Desire will stop at nothing to maintain the new world order. On Juno’s wedding day, their Mengery soldiers came marching through the Nine desert to rip his world apart. Now he journeys east with his adopted brother, Trey, in search of revenge after the murder of his family. Along the way, the two face bandits and the magical creatures of the Nine. When they finally reach Desire, Juno and Trey will face something even deadlier – their own fears and ambitions.

This is a tale of brotherhood, a revenge story that will remind you that everything has a cost – a cost that will be paid to Desire and to the inner demons that govern us all.

The premise and worldbuilding have a lot of promise — I particularly love the emphasis on brotherhood rather than romance, though the dead-fiancee revenge motive is given equal weight, at least in the beginning — but it all just unfolds so slowly. I just don’t currently have the patience to wait and see if the pace picks up.

But for readers who like high fantasy, especially those who are intrigued by an Asian-inspired setting, and who don’t mind a bit of a slow build, I wouldn’t hesitate to recommend this book.

Jillian Johnson, known as the mighty Battlecry, was born into a superhero cult. She craves a life of freedom, far away from her violent and abusive team leader, Patrick. With no education, no money, and no future to speak of, she’s stuck in the dangerous life … until she meets the mysterious and compelling Benjamin, a civilian with superpowers. When Patrick confronts her, she fights back — and then runs for her life. One by one, her ex-teammates join her until a new team has formed.

Desperate and in hiding, Jillian must shed everything she thinks she knows about what it means to lead. Can she rise up to the challenge of defeating Patrick? Can she save Benjamin from his family? Or will she die like every other superhero who’s dared to challenge the cult?

I love that this isn’t about a teenager learning how to use her powers and finding a team — nothing wrong with that, but it’s a story that’s been told many, many times — but rather a 20-year-old who already has an understanding of her powers and Super society (i.e., the authority umbrella), plus a team to rely on; there’s both external and internal conflict as Jillian, aka the titular Battlecry, takes on a leadership role in direct defiance of the elders’ teachings.

Each character is on their own journey in certain ways, but at its heart they’re a found family, with all the love and bickering (and genuine fights) that you’d expect. They have each other’s backs despite their disagreements, and there are quite a few heartwarming domestic scenes: superheroes off the clock, a la The Incredibles! To be completely honest I didn’t feel like I connected very strongly with any of them, not even Jill, but I did appreciate their group dynamic and sympathize with their struggles.

Personally I also felt like some of the character development and romance was a bit too overt, not quite organic. But it didn’t significantly hinder my enjoyment — on a plot level it’s entertaining, and it tackles some interesting issues of ethics and personal values.

The Brilliance of Fireflies by Leslie Hauser

Emma Loukas had a typical teenage life. Until she didn’t. After choosing to stay home instead of accompanying her family to a minor league baseball game, Emma is not present when a suicide bomber detonates an explosive device at the entrance to the stadium just as her family arrives. In the months that follow, grief therapy and the gloomy looks from friends and her extended family do nothing but drag Emma further down into the rubble left behind by that deadly April afternoon.

But when the family mementos on the dresser catch her eye, Emma feels a bit of light turn on inside her. Maybe the way to make sense of her new life is to live the lives her mom, dad, and brother no longer can. So she sets out to achieve each of their dreams. It won’t be easy, but it’s all Emma has left, and in the process, she just may find out who she’s supposed to be.

I read this one in about two sittings, because the story flows so smoothly: each development feels natural and keeps the reader engaged. The premise is touching; I love the equal emphasis given to different types of relationships (familial/friend/romantic) as well as more personal/individual concerns, i.e. Emma’s survivor’s guilt and her grandmother’s dementia; all the different components — running, for her mom; applying to Ohio State University, for her brother; working at the animal shelter to save up to visit Greece, for her dad; and general high school stuff — all fit together in a cohesive narrative.

The main thing is just that I felt like I knew exactly where this story was going. With a single exception, there weren’t really any moments that surprised or startled me; this isn’t necessary to an objectively good narrative, of course, especially since this one does still have moments of tension, but it’s something that I personally would’ve liked to see. That said, this is a nice, comforting read and I’m grateful to have gotten an early copy! 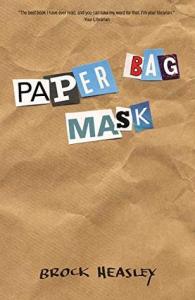 Redmond has no idea why he stole the Whomper. He guesses his extreme dislike (okay, hate… so much hate) of the school’s most popular teacher probably has something to do with it. To his surprise and delight, the hottest girl in school, Elodia Cruz, hates him too.

Soon, Redmond’s small band of misfit friends joins up with Elodia and the most popular kids on campus to hold the Whomper for ransom, pull off an elaborate, broad daylight heist to steal something even bigger from Mr. Street, and expose their teacher for the scumbag he really is.

This is a fun book, and I think for the right readers it’ll be a great hit. Although the main characters are high school upperclassmen (older teenagers/upper YA), I found the themes and general vibe closer to MG/lower YA, so it may very well resonate more strongly with members/readers of that demographic. Which is not to say that it’s simple (in fact, one thing I particularly enjoyed was how the narrative presents ethical dilemmas and the role of personal perspective), just that it’s not really my cup of tea.

The characters are mostly likable, if rather quirky/weird; the main storyline is entertaining — though I did think the romance, including the love triangle, was a bit excessive — with several twists which you’ll know are coming, because the narrative has several instances of “Little did s/he know, things would go terribly wrong later” (which I found a little tiring, but it does contribute some extra tension in case the heist/ransom scheming isn’t enough for you). The ending is a little cheesy, but overall quite satisfying; I had a good time with this one.